In the classic double-slit experiment of quantum mechanics, light, electrons and other quantum elements behave either as waves or particles depending on whether they are measured at the two slits, before being recorded at the back end of the experimental apparatus.

This puzzling fact has caused scientists to wonder, does the act of observation somehow “collapse” a wave (which is a set of possibilities) into definite entities — photons, electrons, or atoms, each going through just one of the slits?

Dean Radin, chief scientist at the Institute of Noetic Sciences (IONS), wanted to find out if the mind alone could collapse the probability waves. So he set up a series of experiments involving thousands of subjects.

No measuring devices at the slits, just people imagining the setup.

Radin presented the findings at the Science of Consciousness Conference in Tuscon, Arizona, 2016. The recording below is long; 41 minutes. But it may be worth your time and attention.

How can you benefit? Follow the evolving research, and in the meantime, focus on focusing! 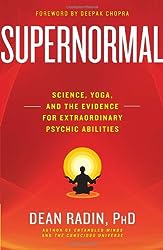 >> Radin's other books on Amazon

As Radin makes clear, mental focus seems to be our basic key to power and aliveness. And it works passively as well as actively, as attention, and also as intention.

Related development: Radin and Roger Nelson conceived and founded the Global Consciousness Project, run by Nelson, which monitors correlations that may reflect the presence and action of consciousness on a planetary scale.

This article also appears in Medium.